We can search for whatever lights up our brain all we want, but the reality is the best way to get there is to find it in front of us.

I’m compiling entries. I want to get a bunch of them done before I start publishing, so I have a backlog for when I get writer’s block.  What I noticed as I wrote two entries this morning is that mental acuity is variable and dependent on active engagement.  I was running on eight cylinders as I worked to finish a book last year, then more or less went into neutral with intermittent consulting sputtering the neurons back into life.  It’s easy to convince yourself you’re not as quick or as sure as before, but the reality is that it’s just inertia and just requires a downshift to higher rpms. For example, I did almost nothing yesterday (unless you count cleaning up after the nest full of starlings that’s been decorating our back porch), before I got things running again this morning. Such behavior is of course reinforced if we’re around others with a tendency to do the same.

It wasn’t inertia but weather that pushed me into neutral last week.  It was too rainy and cold to ride the two-wheeler much, but Sunday began with a glorious ride that took me past a Long Pond, a lake not far from here that was still and sparkling in the morning sun. I didn’t grow up around water, but there’s truth to the womb-like effect it has on most of us. My favorite place of stillness in the world is a magical, pristine lake on top of a mountain that I’ll only identify as somewhere in the northeast.

I took a picture off the deck of our house a couple of weeks ago; we were at extreme high tide and the water was almost to our fence line in the back. Combine that with the climate predictions and breakaway Antarctic ice shelves and I guess in a few years we’ll be waterfront.  Depending on the timing and progression of age, that could be very convenient for putting me on a raft and pushing it out to sea.   (Kidding.)

It’s quite nice being away for the summer, but I tend to hang around the house more, and there’s an occasional feeling of displacement and pull to “go home” at least for a few days. I recognize the symptom as a desire for change rather than escape, because really what is there to escape from?  It’s pretty chill up here, nobody’s bugging me with any deadlines at the moment, and I’m having a really good time rehearsing for my second appearance in a community theater gig this summer. There’s a heap of dogs and cat around us in the evening, after a glass of wine and episode of House of Cards (we all thought it was just a TV fantasy), and the biggest thing likely to disturb my sleep is the early sunrise and chirping outside the bedroom window.  (I confess to being the “Princess and a Pea” when there’s any noise or light filtering into the room.)

The only thing that’s really missing is a jolt of oxytocin (that’s not the same as oxycontin, look it up). We all seem to be most alive when we feel acutely in lust/love, because it’s the ultimate unbounded intermingling of desire and purpose. We feel it in a less acute sense but as the underlying drive behind other things we do, whether that’s as mundane as fixing something that’s broken, as mood-lifting as cocktails with friends, as psychically gratifying as getting on stage, or as professionally satisfying as getting plaudits for completing a client’s project, the finish line is feeling a sense of purpose.  It’s all perfectly explicable as behavioral science, but of course it’s really all determined by dopamine, endorphins, serotonin and other brain chemicals.

I reached a point after an unsatisfying spring in the classroom where I was feeling teaching to be pointless, and was pretty sure I didn’t want to do it anymore. I’ve been wrestling with this over the summer, and haven’t yet found the right, so I’ve been rationalizing the possibility of continuing based on loving the classroom and providing value to the subset of students that actually take some benefit from learning.

Which brings me back to Agespots. We can search for whatever lights up our brain all we want, but the reality is the best way to get there is to find it in front of us. My wife once brought me a t-shirt from a trip she took that was a parody of the “Life is good” brand – it said “Life is crap.” I felt curmudgeonly and ungrateful after being visibly underwhelmed by the gift, and I’m not sure in retrospect why I reacted the way I did…either something about it rubbed me the wrong way or maybe I just felt it wasn’t a message I wanted to billboard. Because even on those days when it really all feels like a nadir, there’s a recognition in some remote part of my head that it’s just not true.

Okay, we’re all aging (better than the alternative), and the joints need a little Tin Man “oil can” attention in the morning, and it’s a pain in the arms to lift the kayak onto the roof, and if we don’t keep thinking about cool stuff our brains get a little lazy. And I’m not even going to go there about the interesting conversations we have lately about not being able to hear each other. But it’s really all more good than bad. So what if I did almost nothing productive yesterday? It’s hardly a sin.

People have different ways of dealing with this thing called age. A buddy of mine, older than me, is concertedly sowing his oats and claims to be acting like a syrup tap in a forest full of maple trees. I get it, but I think I like the idea of that more than I’d like the reality, as it would surely make your back hurt afterward. 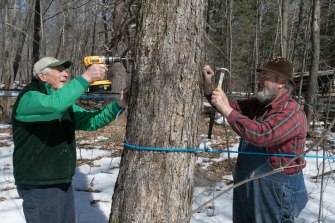